Good things come to those who bake.  ~ Anonymous

I spent Thanksgiving with my siblings at my brother and sister-in-law’s house. I was charged with bringing an appetizer and my applesauce “muffins” and corn muffins.  Now I admit that the corn muffins come straight from the Jiffy mix box. I don’t try to hide that fact. The applesauce “muffins” are a different story. They are made from scratch with a recipe from my 1979 spiral bound (cover notwithstanding) Betty Crocker Cookbook. The recipe is actually for an applesauce cake, but I took liberty years ago of making the batter into cupcake tins.  Since we eat them with our meal and not for dessert, we call them “muffins.”

On Tuesday night I went to double check the recipe and make sure I had everything I needed.  Panic set in. The cookbook was not in its place on the bookshelf. I scoured my office to no avail.  I did however find my mom’s copy of her 1950 Betty Crocker Cookbook. It was missing its spine and had envelopes from 1966 with recipes written on the back tucked into various pages. Thankfully, there in the section on fruited cakes was the recipe for the applesauce cake.  I wasn’t sure if it was exactly the same, but it was close to do my ingredient check.

After many prayers to St. Anthony, my copy of the cookbook appeared, but that’s a whole other story!  I opened the books up to compare recipes, and they were almost exactly alike. The “newer” 1979 version had baking powder, while the 1950 version did not. But what really had me chuckling were the specific directions in the 1950 version.  First, make thick unsweetened Applesauce. What, no dumping in a jar of Musselman’s?!? Bake at 350 (mod. oven). What exactly is a mod oven? I am guessing they didn’t mean convection bake! While I think that my baking is an act of love, the women of the 50’s and 60’s really had to love their families to go through all the preparation it took back then.

I had fun sifting through the pages of my mom’s cookbook, seeing her handwriting, and wondering if she ever really tried those recipes out on us. It made me feel connected to her even though she is no longer with me to celebrate Thanksgiving. 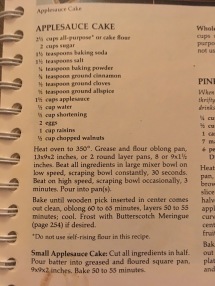 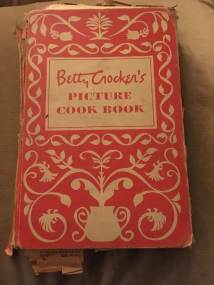 3 thoughts on “The Recipe”