I haven’t posted in awhile. Back to school had me tied up the first two weeks of September, but I never dreamed of what would keep me from writing the rest of the month. My mom passed away on September 20th. Although she was 90 and had been suffering with dementia the past few years, I did not expect it.
I visited her on Labor day with my daughter and two grandsons. She played catch with Parker using her hip pillow, and called out my name when Nolan started crawling out of her room. She hadn’t said my name in a long time, yet she told me to “watch him!” She was laughing and clapping. Seventeen days later she was dead. Though I was not ready, it was her time, and I take solace in the fact that she did not linger and suffer too long. It was a very quick two week decline.

This is really the second time I have lost my mom. The first was when dementia took away her ability to carry on a phone conversation, or give me advice. That took some getting use to, but I still always enjoyed our visits and so did she.

Below are the Words of Remembrance spoken at her funeral. I wrote them with some input from my brothers and sister and my nephew did a wonderful job delivering them. It is the best writing I have done in over a month because she was the best mom a girl could hope for, and was easy to write about. I would have written more, but we were limited on time allowed. Mom memories just might be creeping into my blog posts as I work through this “new normal.”

“Lucy was not the typical mom of her time who would bake cookies or crochet scarves. Lucy worked outside of the home as long as we can remember. Whether it was at Klein’s or Wanamaker’s or selling advertising with Al, Lucy spent most of her working years in the sales industry, and she was very successful. Her grandchildren knew how to recognize a John Wanamaker’s box before they could read. They knew it held something special she had purchased with her employee discount just for them.

But like Mary, in the story of Martha and Mary at the time of Jesus’ visit, no matter how much time work took up in Lucy’s life, she was never too busy to take one of her four children to whatever activity was on the calendar. From sports practices, to scouts, music lessons and more, Lucy was our chauffeur letting us listen to whatever radio station we wanted until we were old enough to drive ourselves and coax her into letting us borrow her car. Some of the greatest conversations were had sitting with Mom in the car in the driveway right outside of our house. It was in those times you knew you had Mom’s undivided attention. You could tell her anything, and she would offer gentle advice and make you feel like you were doing a great job and could accomplish anything.

Lucy was the epitome of optimism. She never complained or had a bad word for anyone. The words that most often come to mind when thinking or speaking of her are: kindness, joy, laughter, sincerity, smiles, and Sinatra.

Lucy was devoted to her faith and the Blessed Mother. She was a regular church goer until her health prevented her from attending. However, that did not deter her faith life. She continued to say her 54 day rosary novenas until just a couple of years ago. When any of us were in need of extra prayers for a special intention, we would make sure to get on Lucy’s prayer list because we believe she had a hotline to heaven.

For as “saintly” as Lucy appeared, she also had a little bit of a mischievous side, like when she would wait for the trolley car to go by so she could sneak into her house without being heard because she was coming home late from a date, or when she let Matthew drive the car before he was 16, or when she would pose for pictures with her grandsons pretending to be smoking a cigar, or when she came out with one of her infamous one-liners – you know what we mean. She certainly lived up to her motto of “celebrating life every day.”

In her last years, dementia stole some of those cherished memories from her, but it could never shake her happy and loving spirit. She continued to light up a room with her smile. She continued to sing her signature song – “If I knew you were coming I’da baked a cake,” and she continued to dance on her walker, which her caregivers fondly dubbed the “Lucy Shuffle,”

We would like to thank her wonderful caregivers at Rose Garden at Ann’s Choice. We could not have asked for a more loving group of women who treated Lucy with such dignity and respect. This really put our hearts and minds at ease especially during Lucy’s last days.

We would also in a very special way like to thank, Nancy, who Lucy called her Guardian Angel. Nancy has been Lucy’s personal valet for at least the last 15 years, taking her to doctor’s appointments, the hair salon, or to meet friends for lunch. She has been the coordinator of Lucy’s care at Rose Garden. The staff there was surprised to learn she wasn’t Lucy’s daughter. They remarked about how well our family got along and agreed on all things pertaining to Lucy – noting that this was not always the way things happened between family members.

This is Lucy’s legacy. She raised her children to be caring. She welcomed their partners as if they were her own children. She idolized her grandchildren and great-grandchildren. She taught us what it meant to be an incredible parent, a supportive partner, a loyal friend, and she showed us how to be happy in life and always look on the bright side.

So while we may be very sad, we need to remember the words from “City of God” – “Let our tears be turned into dancing” because that is what Lucy would want us to do.” 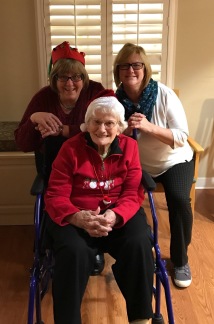 3 thoughts on “A Mother’s Love is Eternal”